Hailey Bieber is getting candid about her struggles with ovarian cysts.

In a recent Instagram story, the 26-year-old model-turned-entrepreneur opened up about suffering from a painful ovarian cyst “the size of an apple” while celebrating her birthday with husband Justin Bieber. “Not a baby,” she wrote over a photo of her stomach, dispelling any pregnancy rumors. “I don’t have endometriosis or PCOS [polycystic ovary syndrome], but I have gotten an ovarian cyst a few times and it’s never fun.”

Although Hailey didn’t elaborate on the cause of her ovarian cysts, she shared that they make her feel achey, nauseous, bloated, “cramp-y,” and emotional. She isn’t alone in her struggle, either. These painful growths are very common among people who are assigned female at birth (AFAB). Here’s everything you need to know about ovarian cysts.

What are ovarian cysts?

Per Mayo Clinic, ovarian cysts are solid or fluid-filled sacs that grow on the ovaries. Symptoms can range from pelvic pressure, to pain during sex, to the bloating sensation Hailey mentioned. Sometimes, people have no symptoms at all. Ovarian cysts are usually diagnosed via pelvic exams or ultrasounds. Causes run the gamut, although they are often associated with hormonal issues.

There are a few kinds of ovarian cysts. One type, called a follicle, forms as a normal part of a person’s menstrual period but doesn’t rupture to release an egg when it is supposed to. Follicular cysts are usually painless and often disappear on their own within 2–3 menstrual cycles.

Ovarian cysts that cause pain or discomfort are usually unrelated to a person’s period. One common variation is an endometrioma, which occurs when tissue similar to the uterine lining grows outside the uterus. As Hailey alluded to, endometrioma are a telltale sign of endometriosis, a more serious reproductive health disorder linked to severe menstrual pain, excessive bleeding, and infertility.

Other types of ovarian cysts include dermoid cysts, which form from reproductive cells that make eggs, and cystadenoma, which develop from cells on the ovary’s surface. The latter can grow very large in size.

Some rare but serious complications can arise from ovarian cysts — namely ovarian torsion, which occurs when a large cyst causes the ovary to twist in on itself, and ruptured cysts, which cause severe pain and bleeding inside the pelvis. Anyone who is prone to ovarian cysts and experiences sudden, severe abdominal or pelvic pain or signs of shock should seek medical attention immediately.

There is no way to prevent ovarian cysts, but understanding your symptoms and risk factors can help you get the medical care you need more efficiently. 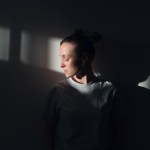 As Hailey mentioned, people with underlying conditions like endometriosis or polycystic ovarian syndrome (PCOS) are more likely to develop ovarian cysts. In fact, recurring cyst-related issues are a common indicator of PCOS, a condition marked by hormonal issues. Other risk factors include being pregnant, having irregular periods, or, like Hailey, having a history of previous ovarian cysts.

Ovarian cysts can be painful, sometimes debilitatingly so. If you think you may be suffering from one, know that you are definitely not alone. This issue affects an estimated 1 out of every 100 people with ovaries.

Don’t be afraid to seek medical care. Depending on your age and the size of your cyst, your doctor may prescribe you birth control to help regulate your hormones, opt for surgery to remove the cyst, or watchfully wait while to see if the cyst goes away on its own while managing symptoms.

“I’m sure a lot of you can overly relate and understand,” Hailey added in her Instagram post. “We got this.”

Before you go, check out the essentials for people on bedrest during pregnancy:

20 Cranberry Recipes to Try This Season