The OECD has slashed its outlook for global growth and doubled inflation projection, warning fallout from war could worsen.

The world economy will pay a “hefty price” for the war in Ukraine encompassing weaker growth, stronger inflation and potentially long-lasting damage to supply chains, the OECD said.

The organization slashed its outlook for global growth this year to 3% from the 4.5% it predicted in December and doubled its inflation projection to nearly 9% for its 38 member countries, according to forecasts released on Wednesday in Paris. In 2023, it expects growth to slow to 2.8%. 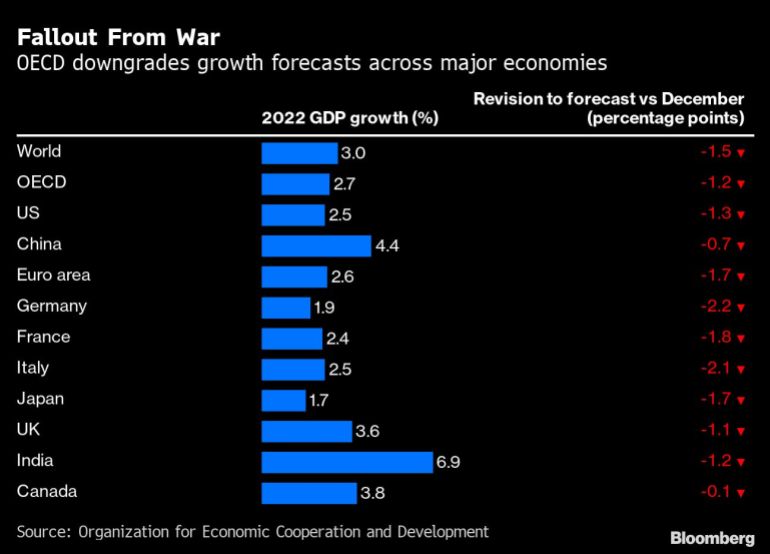 The price of war could be “even higher,” it warned, describing a long list of risks ranging from an abrupt cut-off of Russian supply in Europe to vulnerabilities on financial markets from high debt and elevated asset prices.

“There have been several significant changes in the global economic environment in recent months, including the worldwide spread of the Omicron variant of Covid and the greater-than-expected persistence of inflationary pressures,” the organization said in its economic outlook. “The single greatest change, however, is the economic impact of the war in Ukraine.”

The gloomy assessment, which echoes a similar warning from the World Bank, indicates a deeper and broader economic fallout from Russia’s invasion that will make it harder to set the right fiscal and monetary policies. This is the first detailed view from the OECD, which didn’t issue full forecasts in April because of the prevailing uncertainty.

The early effects of surging prices have already forced central banks to tighten monetary policy, with the US Federal Reserve for example having just raised interest rates at a quickened pace of 50 basis points last month. Meanwhile governments are rethinking spending plans as they attempt to shelter households. 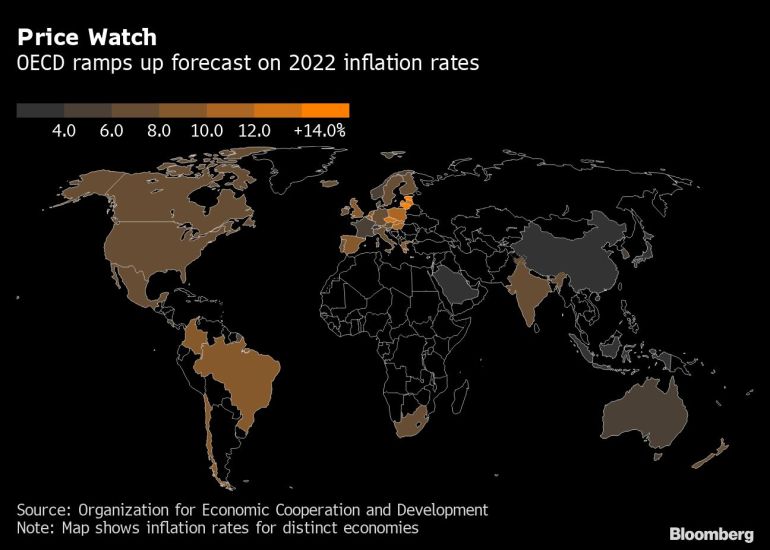 While the OECD said it’s warranted for all monetary authorities to pare back stimulus, it urged caution particularly in the euro area, where surging prices mainly reflect supply pressures.

“Central banks will have to conduct a delicate balancing act between keeping inflation under control and maintaining the post-pandemic economic rebound, especially where the recovery is not yet complete,” the organization said.

The OECD observed that inflation is hitting living standards and reducing consumer spending across the globe, and business are becoming less optimistic about future production. Crucially, that hit to confidence is deterring investment, which in turn threatens to hurt supply “for years to come,” it said.

Still, the organization is cautious about whether the global economy is on the brink of stagflation despite similarities with the oil shock of the 1970s.

Compared to that time, major economies are less energy intensive, central banks have more robust frameworks and independence, and consumers have a stock of excess savings leftover from the Covid pandemic, it said.

“Nonetheless, there are clear risks that growth could slow more sharply than expected and inflationary pressures could intensify further,” the OECD said. 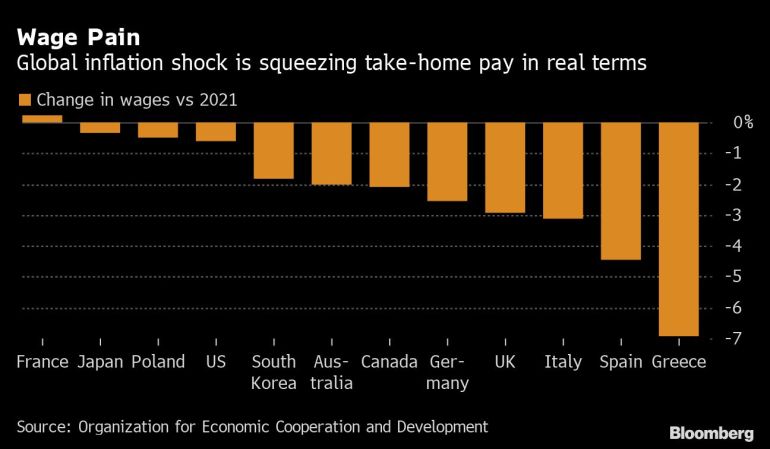 Here are further highlights from the report:

Here are some of the OECD’s recommendations: