Here are the latest updates:

Head of the Office of the President of Ukraine Andriy Yermak has said the continuation of the war in Ukraine and the killing of people and children “makes it clear that the current sanctions policy is insufficient.”

“It needs to be strengthened. It needs to be updated, new sanctions need to be developed constantly,” Yermak said on French TV channel TF1.

Yermak spoke of the sanctions action plan developed by an international group of experts, and led by him and former US diplomat Michael McFaul, which advises what further steps countries should take to pressure Russia. This includes the EU placing a full embargo on Russian gas and oil and “recognising Russia as a country that sponsors terrorism.”

Ukraine will try to establish a humanitarian evacuation corridor out of Mariupol on Monday after attempts failed on Sunday, Ukraine’s Deputy Prime Minister Iryna Vereshchuk has said, blaming Russian forces for not holding their fire.

Russia is “planning a staged referendum in the southern city of Kherson aimed at justifying its occupation”, the United Kingdom’s ministry of defence has said in an intelligence update.

“The city is key to Russia’s objective of establishing a land bridge to Crimea and dominating southern Ukraine,” the defence ministry wrote on Twitter.

(1/3) Russia is planning a staged referendum in the southern city of Kherson aimed at justifying its occupation. The city is key to Russia’s objective of establishing a land bridge to Crimea and dominating southern Ukraine.

The video was shared by the far-right Azov Battalion, which is among Ukrainian forces at the Azovstal steelworks in Mariupol where soldiers and civilians have been holed up under a Russian attack.

One of the women in the video begs for help from world leaders.

“We want to live in our city, in our country. We are tired of these bombings, constant airstrikes on our land. How much longer will this continue?” she says.

Another woman says there are 600 civilians sheltering under the plant, without food and water.

The Azov Battalion deputy commander, Sviatoslav Palamar, says the video was shot on Sunday at the plant.

Writing on Twitter, Zelenskyy described Macron as a “true friend of Ukraine” and said he was convinced that they are “moving forward together towards new common victories. Towards a strong and united Europe!”

OSCE calls for release of members in separatist-held Ukraine

The Organization for Security and Cooperation in Europe (OSCE) has called for the “immediate release” of four of its Ukrainian members detained in pro-Russian separatist territories in eastern Ukraine.

Polish Foreign Minister Zbigniew Rau, whose country currently chairs the OSCE, said the detention of four members “for engaging in administrative activities that fall within their official functions as OSCE staff” was “unacceptable”.

“We call for their immediate release,” he said. “They have been held without charge for a period of time now and the OSCE and their families have not been sufficiently informed of the situation.”

Earlier, the OSCE wrote on Twitter it was “extremely concerned” that several members had been “deprived of their liberty”, following Russian media reports they had been arrested. 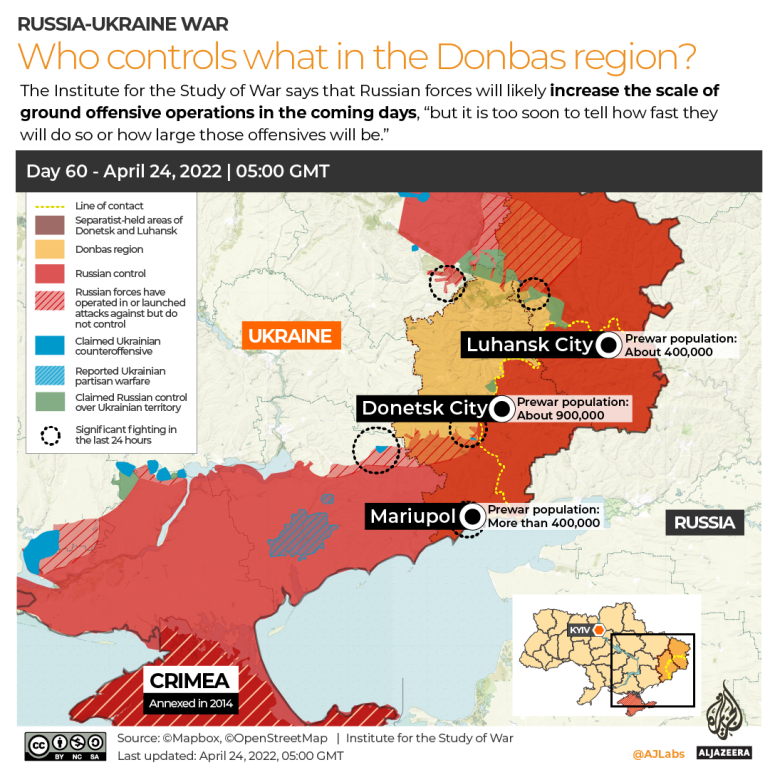 An adviser to Ukrainian President Volodymyr Zelenskyy said the US secretaries of state and defence were meeting with the Ukrainian leader, in the highest-level visit to Kyiv by a US delegation since the start of Russia’s invasion.

Oleksiy Arestovych said in an interview on Ukrainian TV that the talks with Antony Blinken and Lloyd Austin were taking place late on Sunday. There was no immediate comment from the US.

Prior to the meeting, Zelenskyy said he was looking for the US to bolster its arms shipments to Kyiv.

Welcome to Al Jazeera’s continuing coverage of the war in Ukraine.

These were the updates on April 24.