Chandrapur, India – Gokulbai Sahai, a 60-year-old widow, was waiting at the local government-run clinic in Durgapur in the Chandrapur district of Maharashtra. Dressed in a sari with a blue stole wrapped around her head, Sahai, whose vision is blurred, was being helped by other patients to figure out where she should register for treatment and where to wait till the doctor called her turn.

Gokulbai, who has to beg for food or depend on her neighbours ever since her husband died of asthma a few years ago, blames the pollution from the fumes of the coal-fired power plant near her home for her troubles, including her husband’s death.

“My husband got asthma from the polluted/dark air emanating from the power station,” Sahai told Al Jazeera on a recent April day. With most jobs prevalent in the area, moving out was not an option for her husband who was a construction worker, she says. Pointing to the dark fumes emanating from units of the Chandrapur Super Thermal Power Station (CSTPS) in the Durgapur slum where she lives, she adds, “We cannot see a clear sky, it is always blurred above.”

CSTPS, Maharashtra’s biggest coal power plant with a capacity of 2920MW, is owned by the state-run Maharashtra State Power Generation Company (MAHAGENCO). It accounts for a quarter of the state’s total power needs, one of the most industrialised and urbanised in India. Since its inception in 1983, CSTPS has commissioned nine units of which two are no longer in use.

Since the time he was in his late 30s, Gukulbai’s late husband “would cough all the time, relentlessly” she said. Despite several years of seeking treatment at the local hospital, “he never recovered”, she said, finally dying eight years ago at the age of 50.

According to a February 2022 report by the Centre for Research Clean Energy and Air, an independent research organisation in Helsinki, Finland, that focuses on air pollution, 1,300 people have died prematurely in 2020 (PDF) alone across Maharashtra and neighbouring states because of air pollution from this power plant as pollutants from the tall stacks travel as far as 1,000km (620 miles). About 800,000 people called in sick in and around the state that same year.

Last month MAHAGENCO served a defamation notice to CREA researchers over the report, questioning their methodology and results. CREA is yet to respond to the notice, it said.

To tackle the perennial pollution, Chandrapur resident Madhusudan Roongta filed in October 2017 a petition before the Nagpur Bench of Bombay High Court, alleging that the CSTPS was violating the environmental norms laid by the Ministry of Environment, Forest and Climate Change (MoEFCC). The case was transferred to the National Green Tribunal (NGT), India’s court for environment-related cases, which set up a committee to study pollution caused by CSTPS.

The committee found that of the plant’s five units, the emission of sulphur dioxide (SO2) from two units was more than 1,067mg/NM3, close to double the standard of 600mg/Nm3 prescribed by MoEFCC. The other three units emit SO2 five times higher than the standard limit. Besides, the sulphur content in coal used for power generation is higher at 0.58 percent than the subscribed standard of 0.50 percent. SO2 affects the respiratory system, especially the lungs, and increases the risk of asthma and chronic bronchitis.

It also found that CSTPS had not installed a scrubber system, known as flue gas desulphurisation (FGD), which removes the toxic sulphur from its emissions, despite a 2015 government order to do so within two years.

The report further pointed out that the fly ash that was also being spewed by the coal plant, contained SO2, carbon monoxide (CO), and nitrous oxide (N2O), all of which cause respiratory problems, including pneumonia, bronchitis, asthma, stroke, and cough.

Two CSTPS units that are among the biggest contributors to these pollutants are within the city limits, points out Rajesh Bele, a local social activist. Trucks carrying coal to these units also travel through the city and do not bother to cover their cargo, allowing dust from the coal to permeate the air.

Moreover, the thermal power plant discharges its water without filtering out the fly ash – what is left after the coal is burned – polluting the area’s groundwater, added Bele.

Under Indian law, all thermal power plants have to ensure that the fly ash is fully used up. CSTPS is currently not using it 100 percent, and has received multiple extensions on the deadline to do so. As a result, the ambient air quality has exceeded the National Ambient Air Quality Standard (NAAQS) limit of PM10 (inhalable particulate matter with diameters 10 micrometres or less), according to the report.

Based on the committee’s report, NGT ordered CSTPS to carry out a survey to determine if the pollution from the plant was affecting the health of the people living around the coal plant, install sulfur scrubbers and treat the fly ash. If it failed to do so by the given deadline, it would face a penalty of 50 million rupees ($645,266). The power company responded by going to the Supreme Court which has since halted the NGT’s orders while the matter is being debated in the court. 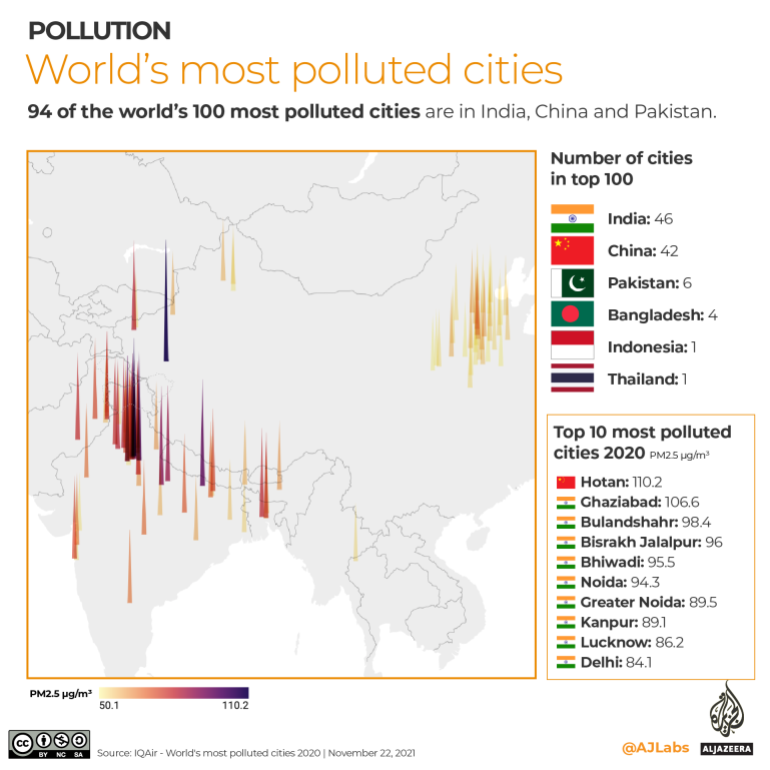 Dr Gopal Mundhada, a local paediatrician who runs a non-profit organisation called Save Chandrapur Committee that works to reduce air pollution, among other causes, said the number of people with asthma, and other respiratory diseases like bronchitis, skin allergies, eye allergies, pneumonia, has “doubled” in the last 15 years. “Many babies die prematurely [and] 50 percent of the babies below five years old have asthma,” he told Al Jazeera.

In November, his organisation surveyed more than 450 people and found that three-fourths had asthma, skin problems, and eye problems, all said to be on account of air pollution. He is now worried about how the COVID-19 disease is affecting the area’s residents with their respiratory systems already weakened.

“Research needs to be done whether the number of deaths due to COVID, that affects the lungs, are more in the city as people might have weaker lung capacity due to breathing polluted air for years,” said Dr Mundhada.

Some of the emissions can be reduced and lives can be saved if the government shuts down two of the plant’s older, and most polluting, units, says CREA’s Dahiya. For the rest, it would help to install the FGD scrubbers, a step that can save economic damages of 16.5 billion rupees ($222.9m) a year with fewer people taking sick leave, as per the report.

A MAHAGENCO official who declined to be identified as he was not authorised to speak to the media said CSTPS was planning to install the FGD scrubbers by 2023 and will dispose of its fly ash residue 100 percent by 2025.

But with years of delays – orders to dispose of the fly ash were given in 2009 while orders to install FGDs were first issued in 2015 – “how serious is [the environment ministry] to reduce pollution”, asks Suresh Chopane, an environmental activist in Chandrapur.

The years of delays have affected locals like Ramkrishna Yadav, a 58-year-old labourer who has been working in Chandrapur for the past 34 years and developed asthma about 10 years ago, he says. Despite daily medicines for it, the cough does not stop. “Earlier [my cough] would become intense only in the winter. Nowadays, I always cough,” he told Al Jazeera.

And at least once a year he has to be admitted to a hospital to treat it, including in November last year when he was slapped with a 60,000 rupees ($806) bill. “I cannot work all days of a month nowadays” because of the persistent cough, Yadav says.

“Air in Chandrapur is polluted as compared to other places … Whenever I stay more than four-five days at my native village in Uttar Pradesh, my cough gets reduced. I feel fresh. Once my sons start earning, my wife and I will move to my village,” he said.

2 Reasons Bear Market Scare May Be Over