In the battle for the Donbas, the fight over Severodonetsk has entered a crucial stage. Ukrainian units are locked in a desperate struggle with Russian infantry and armour intent on taking the city, which is at the eastern end of a Ukrainian defensive pocket now in serious danger of being cut in two.

While maintaining a grip on the city, Russian forces to the south of this salient are also slowly advancing north in an attempt to cut the roads leading to the town of Bakhmut.

To the north, Russian infantry and armour have been pushing south towards the strategically important towns of Sloviansk and Kramatorsk, with their vital rail junctions, crucial for the movement of supplies and vehicles given the vast distances that the war in eastern Ukraine involves.

These two Russian thrusts are designed to pinch this ever-narrowing pocket, squeezing it until Severodonetsk and Lysychansk are cut off from the rest of Ukraine, effectively surrounding and besieging the Ukrainian units caught in the Russian pincer.

Now in its fourth month, the war’s dynamic has changed. Russia has consolidated its forces, keeping its best troops for the operation in the Donbas while continuing to hold its positions elsewhere using reservists equipped with older tanks like the T-62.

As Ukrainian air defence units pull back from the Severodonetsk pocket to avoid encirclement, Russia’s air force can now operate more safely, being threatened by shoulder-launched weapons which are only effective against low-flying aircraft. This has allowed the Russian air force to support the accompanying ground advance, pummeling the two besieged cities, already devastated by artillery and missile attacks.

Russian forces are still making clumsy moves. In early May, more than a battalion’s worth of soldiers and armoured vehicles attempted to cross the Siversky Donets river to try and cut off the Ukrainian defenders in the two cities. The likely crossing site had been previously surveyed by Ukrainian forces as a probable spot for a pontoon bridge river crossing. Ukrainian artillery units had zeroed in on the coordinates and bunched up columns of Russian armour were spotted by drones as Russian forces waited for the bridge to be assembled. The resulting barrage devastated them, annihilating the Russian units and destroying the makeshift bridge in the process.

Although still suffering tactical defeats, Russian forces are advancing. Improvements have been implemented after the initial debacle at the beginning of the war. Supply lines have been shortened, the gains now slower and more methodical as Russia’s high command slowly learns and adapts to the war in the east.

Both sides now use drones effectively, the sight and sound of one usually a prelude to an artillery attack that in the flat terrain can have devastating consequences for units with relatively few places to hide.

Artillery is the prime weapon of choice as duels are fought between the two armies. Foreign weapons systems, howitzers, tanks and multiple rocket launchers supplied to Ukraine by the West, are making themselves felt but also bringing their own problems.

A war of logistics

Sustained combat takes a toll not just on the people who fight but also on the equipment used. The barrels on artillery pieces get worn out after several thousand rounds, lose their accuracy and need to be replaced. The tracks on armoured vehicles need regular maintenance. Damaged vehicles can be fixed but this takes time and manpower. Russia’s troops have to deal with poor maintenance but Ukraine’s maintenance and repair crews now struggle to fix a variety of unfamiliar foreign systems for which there are few spare parts. Damaged tanks, vehicles and artillery have to be redrawn from vital sectors while they are being repaired by the few Ukrainian staff that are able to fix and turn them back into effective weapons.

One of the few strategically smart moves on Russia’s part has been to strike at Ukrainian repair facilities far behind the front lines in an attempt to slow Ukraine’s repair cycle down, with the intent of eventually overwhelming the few serviceable Ukrainian weapons and vehicles left in the field.

Russia is also starting to run low on armoured vehicles and artillery as the war takes its toll on equipment, with Russia’s economy not yet on a war footing. The conflict is now increasingly focused on logistics and grinding battles of attrition, with movement being limited to a series of small objectives that are all starting to mount up to show that Russia is slowly turning the tide.

Russia’s casualties are heavy but at roughly 100 Ukrainian military deaths along with 400 to 500 wounded per day Ukraine is starting to lose some of its best soldiers as the country’s forces are caught up in a meat grinder that shows little sign of slowing down. 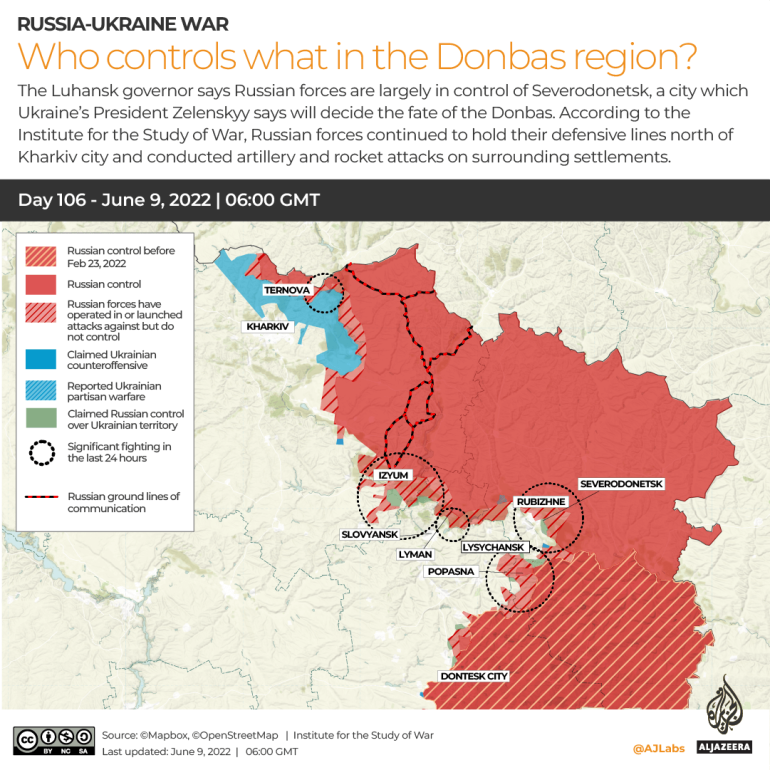 Objectives, too, have changed. The closing of the Severdonetsk pocket aside, the focus is now on transport nodes like rail junctions vital in a conflict where soldiers, military vehicles and vital supplies have to move large distances and arrive fresh to fight. Trains are able to move hundreds of troops and thousands of tonnes at any one time, which is very useful to Russia’s military as it is able to sustain its advance towards its objectives, albeit at a slow and costly pace.

Russia still has not suppressed Ukraine’s air force but it is not trying to. It is making slow gains and steady moves, using troops that are increasingly battle-hardened and keeping casualties relatively low when compared with its disastrously clumsy moves at the beginning of the invasion. The air force now works more efficiently supporting infantry and armoured units.

NATO countries have worked together to keep Ukraine armed but are still reluctant to give Ukraine weapons systems that can attack targets inside Russia, fearing escalation involving a probable Russian declaration of war that would lead to the total focus of its economy on the conflict.

An escalation of the war could lead to general conscription in Russia, which would vastly increase the size of the military forces at its disposal, albeit being poorly trained. The implied use of nuclear weapons would also never be too far off if the country felt it was being sufficiently threatened. The ultimate fear of NATO countries is that the war would rapidly slide out of control, triggering a nuclear conflagration, something everyone, even Russia, is keen to avoid.

The war has raged for several months and there is now a race between Ukraine and Russia to see who exhausts the other first and, in this new phase of the conflict, who can keep supplied and armed as Russia slowly inches its way towards its goals and Ukraine fights on to grind down Russia’s advance in the Donbas.

Is It Too Late For Energy Stocks?