Guess the adoptable pet’s name in six guesses or less!


Start of the game!

I’m excited to introduce something that I’ve been working on with the Temptalia team to bring this concept to life! We just launched Adoptle, which is a quick game where you have six guesses to figure out the name of that day’s adoptable pet. Each day, at 9PM PT/midnight ET, a new, adoptable pet will be featured and you can play again to see if you can guess their name in six guesses or less. You can head over to play Adoptle here or keep reading to learn more about it.

If you’ve played Wordle, or any of its many variations, it should look somewhat familiar. Adoptle features a flexible grid, so the answers range from four to eight letters, and we’ve made it so you can guess shorter words than the answer’s length, if desired. So if you want to use ADIEU as your starting word, you still can, even if the answer is longer than five letters! 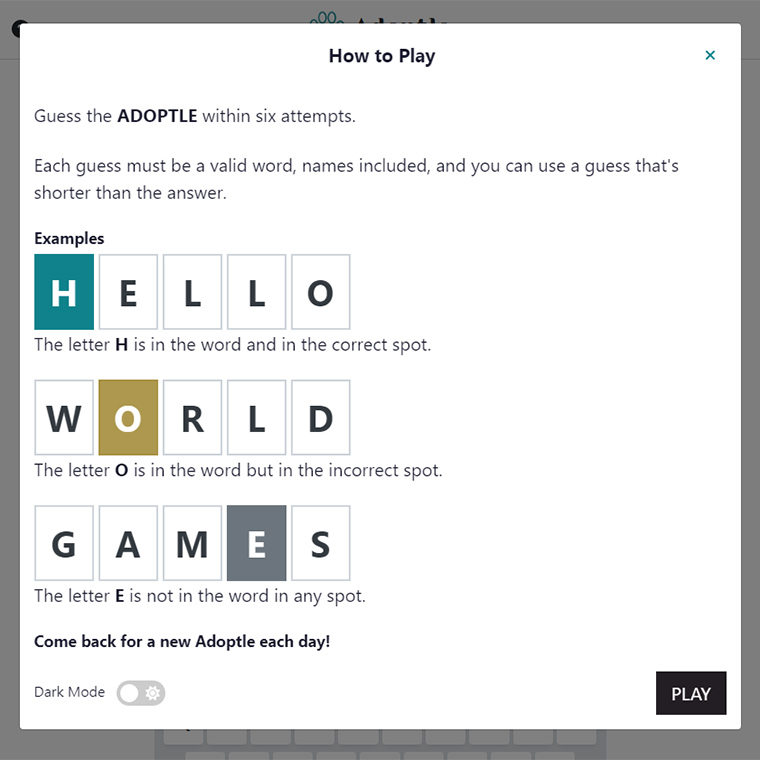 You have six guesses to figure out the correct answer, which will the name of the adoptable dog or cat of the day. The name could be a regular word, say Biscuit, or it could more commonly used as a name, like Martin. When you get a letter in the correct position, it will highlight with teal. When you get a letter that is in the answer, but not in the correct position, it will highlight olive. Any letters that are not in the answer will go gray. There is also a dark mode available for those who prefer that display setting. 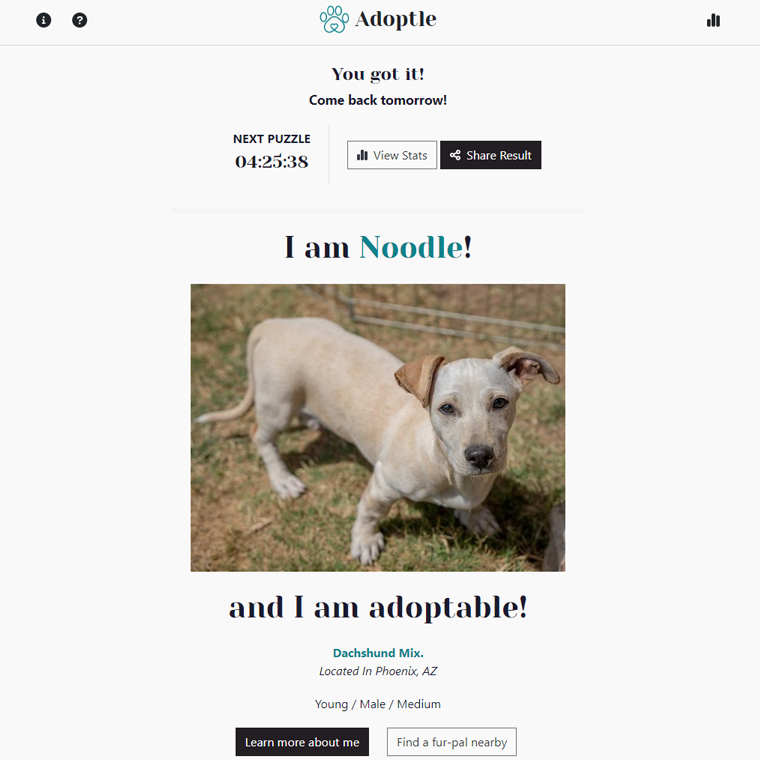 Whether you get it wrong or right, after you’ve made your six guesses, you’ll see the day’s adoptable pet. Noodle, above, was one of our test doggos that we used during development, but you can view his adoption page!

We’re currently highlighting animals from shelters around the United States, nearer to major cities (like Phoenix, Los Angeles, etc.). In my dream world, we’ll be able to later fill an archive of Adoptles that have been adopted. We are also looking to work with specific shelters and rescues that are doing particularly good work in the space and to highlight animals that are special needs, seniors, or have just been waiting for their fur-ever home for a very long time.

Try Hard Guides is hubby’s third gaming website (the other two were acquired), and it’s something that I’ve been working on part-time as well, which has been new and exciting for me to be part of the start of the journey (Temptalia  is a well-oiled machine at this point, it’s old hat!). It’s also been interesting working more closely with Shaun, my husband, on a day-to-day basis. Sometimes we joke that we’ve been together a lot longer than 17 years since we have been in each other’s pockets for almost 15 of those years (living together, working from home, working together, etc.).

I’ve always loved word puzzles and games–I used to burn through logic puzzle grids, word searches, and unscrambling games (I miss you Yahoo! Word Racer). Hubby and I even met playing a game of unscrambling words and sentences in a chat room over 20 years ago. Even now, I enjoy games that don’t require a lot of commitment or time, where you don’t have to grind through levels or spend 20 hours to beat the game.  I hope you’ll indulge me when I do some cross-promotion from time to time as this has been a fun and creative outlet for me.